This festival has three main objectives: to inform about the importance of resident and migratory birds, to involve the community in environmental care activities, and to positively impact the opinion and insights of the San Quintín people into the conservation of the bay and the species that inhabit there.

Over 100 people attended the second Bird Festival, held on November 5, 2016 in La Chorera. Different activities such as bird-watching, arts and crafts workshop, live music, ornithologist lectures, and falconry display were carried out throughout the day. 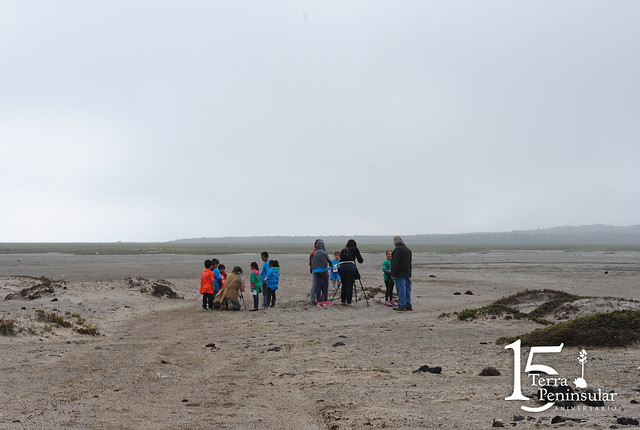 To officially inaugurate the second Bird Festival, Cesar Guerrero, the executive director of Terra Peninsular, gave a welcome and gratitude speech to thank the attendants and the communities of La Chorera and Chapala for hosting the event as well for their continuous support.

He mentioned that the main idea of the festival is to have a fun event where people of all ages can raise awareness of the importance of the birds that live in San Quintín Bay.

BIRD-WATCHING AT THE BAY

Students from a San Quintín high school joined some members of the staff of Terra Peninsular in a tour boat around the bay to watch birds. Ornithologists, members of a bird-watching group in Ensenada called “Los Correcaminos” (“The Roadrunners” in English) guided the tour and were accompanied by some high school teachers.

During the tour, the students had the opportunity of watching different species such as: Royal Tern (Thalasseus maximus), Great Egret (Ardea alba), Black-bellied Plover (Pluvialis squatarola), and Western Grebe (Aechmophorus occidentalis) to name a few.

Furthermore, they watched the recently arrived Black Brants (Branta bernicla nigricans), a migratory bird that flies thousands of miles from Alaska to winter in San Quintín Bay and other coastal lagoons in the peninsula of Baja California.

Kids, on the other hand, also experienced bird-watching at the beach and wetland near La Chorera. They were given colorful bird guides and binoculars in different sizes. Diana Ramirez, from the organization Contacto Salvaje Ensenada, guided this activity.

The festival’s activity program included lectures by Jonathan Vargas, Javier Girón and Marco Martínez. All three of them are bird experts, who talked about different topics such as bird migration, the Red Knot (Calidris canutus) and the importance of protecting the habitats and species found in San Quintín Bay.

Diana and Marco, from Contacto Salvaje Ensenada, amazed the audience with a falconry display, where they introduced two birds of prey: an American Kestrel (Falco sparverius) and a Harris’s Hawk (Parabuteo unicinctus) called Lucky, a trained bird used in pest control.